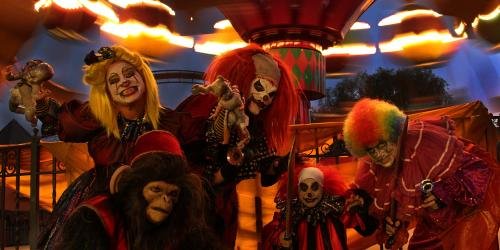 It’s that time of year again where pumpkin spice becomes the trend and the weather turns to a cool autumn temperature. Though things like binge-watching horror movies and trying limited time food and beverages are main yearly occurrences for many, there is a more prevalent tradition: attending Fright Fest at Six Flags.

Fright Fest is a temporary entertainment area within Six Flag’s amusement park in Chicago that runs from mid September to early November. When the sun goes down at the end of the day, the ghouls and zombies are unleashed, roaming around in various scare zones and haunted houses.

This event engulfs the whole park, including the rides. If you’re “lucky” enough, you may end up riding the Goliath with two devilish zombies seated on either side of you. These characters are not afraid to interact with the guests. They might not only creep up on you and scare you so, but they are even daring enough to strike up a conversation and take photos with you. “I went on Thursday over fall break so it wasn’t as busy but nonetheless the ‘scary people’ came up to me at every location I went to. [Senior] Julian Sepulveda and I tried hiding behind other groups but that didn’t work, sadly,” said senior Sara Mehisen.

New to Fright Fest this year are 13th Order and Infected.

Originally based off of a legend, 13th Order places you in the center of a woodsy town that houses a malicious society looking to initiate new members for its cult-like organization. The objective is to survive the mentally challenging set of “carnage” to see if you would be fit for initiation. Attendees are advised to watch their back for whatever might be lurking around.

Enter the laboratory of hell in the land of Infected. Guests travel through a maze of twisted halls and concealed experiments without being infected by the laboratory staff, who are looking for a new host. The history of this attraction began when a secret government weapon failed and allegedly left the area without any survivors. As one might guess, there actually were survivors- and now they’re seeking revenge for those that has previously turned on them. Don’t get comfy on this ride, because if you get too close, the intoxicated faculty will infect you with one touch.

Sophomore Peyton Willis said that she loves to stay at Six Flags into the night when the haunted houses become more lively and thrilling. She checked out the new attractions and really enjoyed how exhilarating they were.

If you haven’t had a chance to visit Fright Fest this year, it is highly recommended to do so! That is, if you’re one who loves to be scared. Check out these new attractions before they’re gone. Get ready for chills, frights, and a night you’ll never forget.