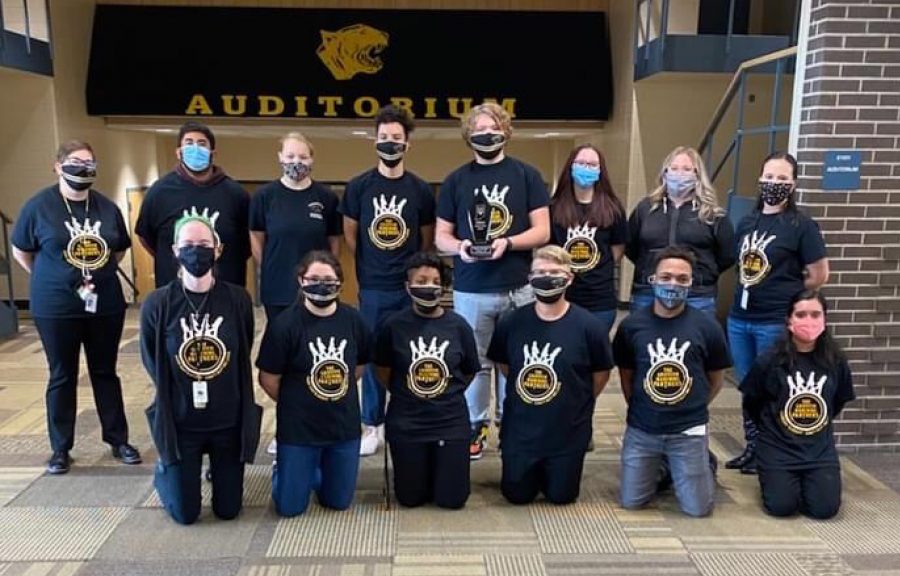 On Friday, October 16th, the Griffith Marching Panthers debuted their instruments at “The Beatles” themed halftime showcase, which was their first and only halftime show of the season. This occurred during the homecoming football game, where they performed classic hits such as, “Can’t Buy Me Love” and “A Hard Day’s Night.” This performance was really important to the band because it led them to receive their first gold trophy since 2009 from filming and submitting it to ISSMA (Indiana State School Music Association) for educational critiques. Normally, the marching band travels to an ISSMA competition at a high school every school year to perform their designated group and solo performances for the judges that they’d been working on all season, but this year proved to be different under the circumstances of COVID-19. The pandemic forced the cancellation of in-person ISSMA and led the marching band to resort to filming their performance and submitting it virtually, as did all other marching bands around the state who wanted to enter their performances into the competition this year.

COVID-19 has impacted many of the extra-curricular activities at Griffith High School, but none more so than the marching band. COVID-19 had changed many key factors into having a successful marching band compared to in years past, which made it even that more amazing when they won gold again after so long. The biggest change being that the band had a dramatically reduced season where they weren’t able to perform at all of the football games or start their practices during the summer before school had started due to the late approval from the school board. Instead, the band was only able to schedule one performance for the season and started practicing their music two weeks before they were actually supposed to perform. Another huge change was the size of the marching band this year. Calling themselves, “small and mighty”, the marching band had a great reduction of their normal players due to concerns of contracting COVID-19. Most decided to stay home and away from possible risks of contracting the sickness, so the Griffith Marching Panthers had to adjust to their new size. Others decided to perform this year against all odds, especially seniors, for it would be their last.

Marching Band Director and Band/Choir teacher at Griffith High School, Virginia Hernandez, said, “We were forced to acquire a whole new set of safety rules for this year. We made masks for our instruments as to not have several players blow their germs out of them. Most people even made slit masks for themselves in order to play the wind instruments. We followed all of the safety rules that allowed us to play and made sure to practice social distancing as much as we could. Remaining in communication with families to encourage their students to join despite COVID-19 was a huge thing over the summer, and researching the different rules made it easier to give them the correct information.”

When asked about how she felt about her marching band winning gold this year at ISSMA, Hernandez stated that the previous directors had never entered a virtual submission before and part of it is just entering into the competition.

“ISSMA rates every area on musical and visual scales. We knew that the season had been reduced, so I made sure to select music and movement that was flexible. We added the melody into multiple parts of the performance, so if someone had ended up getting quarantined, the melody could always be heard. The marching band also used great, solid techniques that I worked with them on last year to be able to project sound,” she said.

For most, marching band is an impactful and creative way for students to express themselves and their musical desires. That aspect of it didn’t change at all for the Griffith Marching Panthers this year. They persevered and put forward their best effort as to have a successful performance and an equally good time. Teamwork and motivating each other, despite the circumstances, contributed to this.

Junior Andrew Cavazos, who plays the trumpet for the Griffith Marching Panthers, said: “We were full of smiles and laughs during practice, but we also knew that we had to work hard if we even had a chance at winning gold. We made sure to practice with each other and guide each other when mistakes were made. It was really a matter of determining what we were doing wrong or right, and helping each other out 24/7. We even had some goofy moments in between practices, yet still took it serious when need be.”

In the end, the Griffith Marching Panthers had a short but sweet season filled with laughter and plenty of music. The most important part was that they were still able to return to their roots after a long and stressful quarantine over the summer. Being able to perform at a football game again made most feel comforted and returned a sense of normalcy to Griffith High School that hadn’t been there since the pandemic hit. A gold trophy for an undeniable “small but mighty” group of kids seemed just the perfect way to end a season that was made the best of.