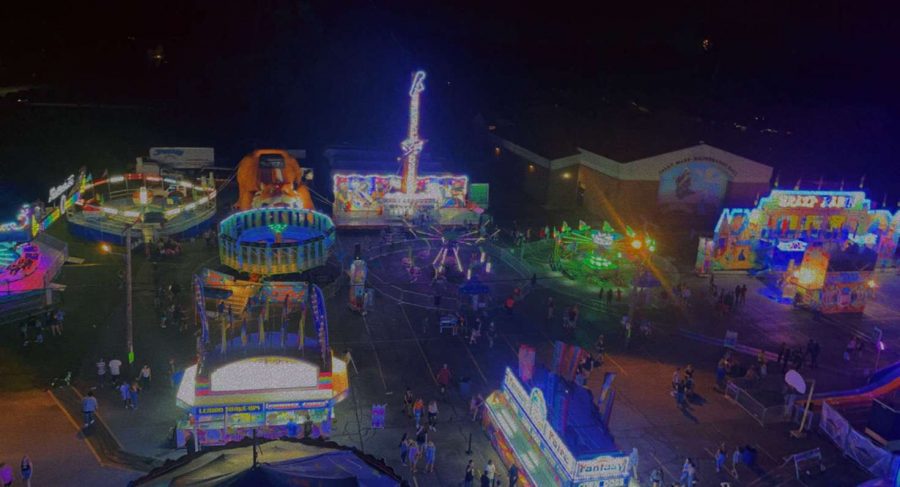 When was the last time you’ve been to a carnival? Oftentimes people hear “carnival” or “fair” and their minds drift off into a childlike bliss filled with the smell of fried foods and flashing lights of carnival rides. Your mind might even drift specifically to the annual St. Mary’s Fair, also known as Western Days, which has been a mainstay for the town of Griffith for over 45 years now. This event has consistently drawn huge crowds from all over the town and the region for years, even having the traditional Griffith reunions at the Squirrel Tooth Saloon within the fair. It was this combination of music, drinks, food, and rides that has kept Griffith residents coming back year after year. This year’s St. Mary’s fair looked very different compared to years past, though. It was announced that there would be no music, no beer garden, and even no food trucks. This announcement was met with mild disappointment from Griffith families, as they expected the usual fair this year. With expectations set so low, could the fair deliver an enjoyable experience despite the lack of usual commodities?
As I entered the familiar parking lot I’ve gone to every summer for most of my life, I tried my absolute hardest to recapture that childlike wonder I always held whenever I went. Believe it or not, the fair just didn’t feel the same. This might be because I’ve grown up a lot since the last time I’ve been, but it was undoubtedly barren without the music or food trucks. This was the smallest crowd I had seen at any Griffith event and it just felt pitiful. No music from the rides, no familiar smell of fried food, and there were barely even the typical carnival games. Despite this, students and families still found ways to enjoy themselves, walking around and riding rides.
I believe Julia Gonzales, a junior, said it best. “It’s kind of sad because it takes the ‘Griffith-ness’ out of it, although it has more rides.”
It felt like a fair, but it’s true that without the music it just didn’t quite feel like Griffith. Known for the elaborate “Rock ‘n Rail” festival and weekly markets, Griffith has gained quite the reputation as a music town, so the fair just felt quiet and empty with the absence of live entertainment. Even though it may have been disappointing to some, even crowds from other towns still came to ‘hang out’ and ride rides.
“It’s different,” said Crown Point junior, Jack Winston. “It doesn’t have the feel of other fests, but it’s still fun.”
It seems that the general opinion of the attendees of Western Days this year was that it was not the same, but still enjoyable. Hopefully this is the only year Griffith sees a change to such a staple event. In the meantime, we can all look forward for Rock ‘n Rail in September.